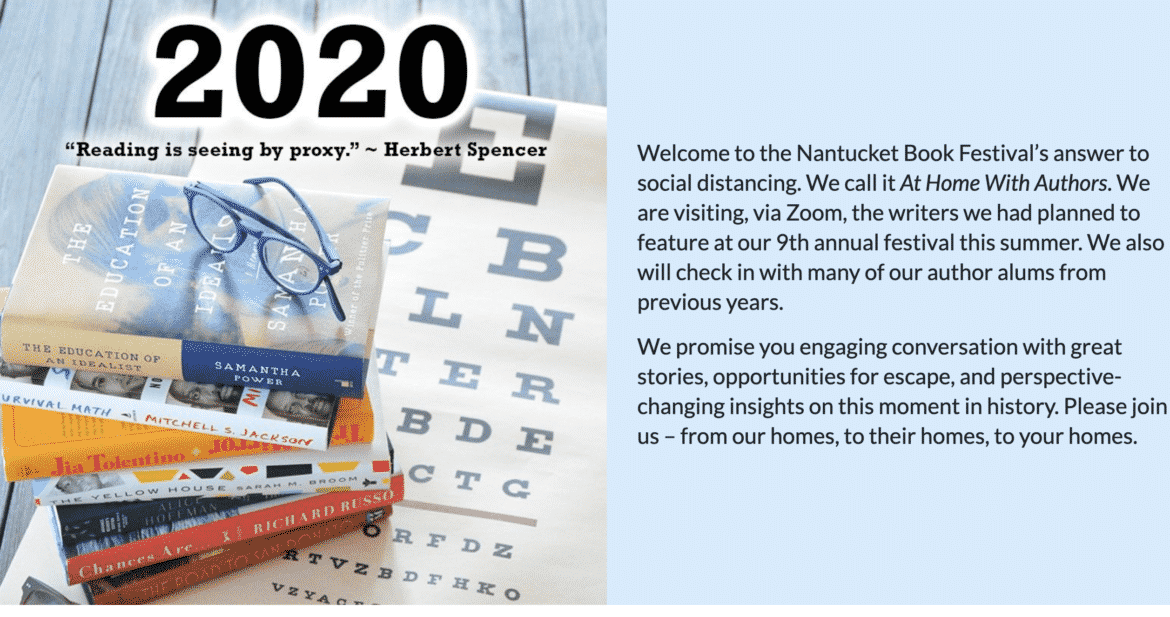 I haven’t left Nantucket since February 25th. But last week, I was on a houseboat on the River Thames. Since late February, I have been to high rises in New York City and the suburbs of Philadelphia. I’ve been to a yellow house in New Orleans, the rocky shore Nova Scotia, and the deserts of the American west. I’ve been on whaling ships and to one-room schoolhouses. I stopped by Tinker Creek, Virginia and Alaska in the 1970s. I visited our neighboring island, Martha’s Vineyard, and returned to my hometown of Provincetown on the Outer Cape.

I did all this without breaking the stay-at-home order. How have I managed this feat, these travels through time and space? You likely already know the answer—by reading. I have never more acutely understood the power for books to transport and connect people than I have during this period of isolation.

All year long, the committee that organizes the Nantucket Book Festival (NBF) works hard to bring together some of the world’s best writers to our sandy shore. We like to say that at the Book Festival you’ll hear from award-winning writers, and writers who will go on to win awards. The Book Festival presents bestselling writers as well as those who are not a household name—but they will be soon. It doesn’t matter how difficult the work of organizing the festival is, because the weekend in June where everything comes together is always nothing short of magical.

Gathered in the Atheneum, the Unitarian Church, the Methodist Church, and the Dreamland, I am reminded of Nantucket’s history when islanders of yore would assemble to hear the great speakers of the day. This island, while far away from the mainland, has never been intellectually isolated. Minds and hearts have been opened by the conversations had in these buildings, and the Nantucket Book Festival carries on that proud tradition.

When it became clear that this year’s Nantucket Book Festival was not going to be able to take place in its usual form we knew this tradition had to continue in some fashion. We did not want to lose out on a chance to connect with our community of writers and readers. After all, aren’t people reading now more than ever?

That’s where the idea for At Home With Authors, our video and podcast conversations with the authors you would have been hearing from in June, came about. NBF committee member Michael Schulder and and veteran CNN Senior Executive Producer and writer has been heading up this “virtual festival,” interviewing many of this year’s authors. Other NBF committee members and friends have contributed to this project, which has resulted in candid, in-depth conversations that we hope will capture some of the magic of the Book Festival.

Years ago, I considered reading and writing to be solitary tasks that often required a monk-like devotion. My involvement with the Nantucket Book Festival has allowed me to more fully understand the transformative power of connection and commeradarie when it comes to the literary arts. And it turns out when you get book people together, even on a Zoom call, wonderful things happen.

Soon we’ll begin work on the 2021 Nantucket Book Festival—our 10th anniversary. We’d love to know what you’ve been reading, and if there is a particular author you’d love to hear from. You can write to us and watch the At Home With Authors conversations on our website. I know the entire committee and board joins me in saying we wish we could all be together this year, and we look forward to when it will be safe to gather once again.

Mary Bergman is the Chair of the 2020 Nantucket Book Festival,
Executive Director of the Nantucket Preservation Trust,
and a writer and historian.

New and Lighthearted Rhymes for the Times