New and Lighthearted Rhymes for the Times 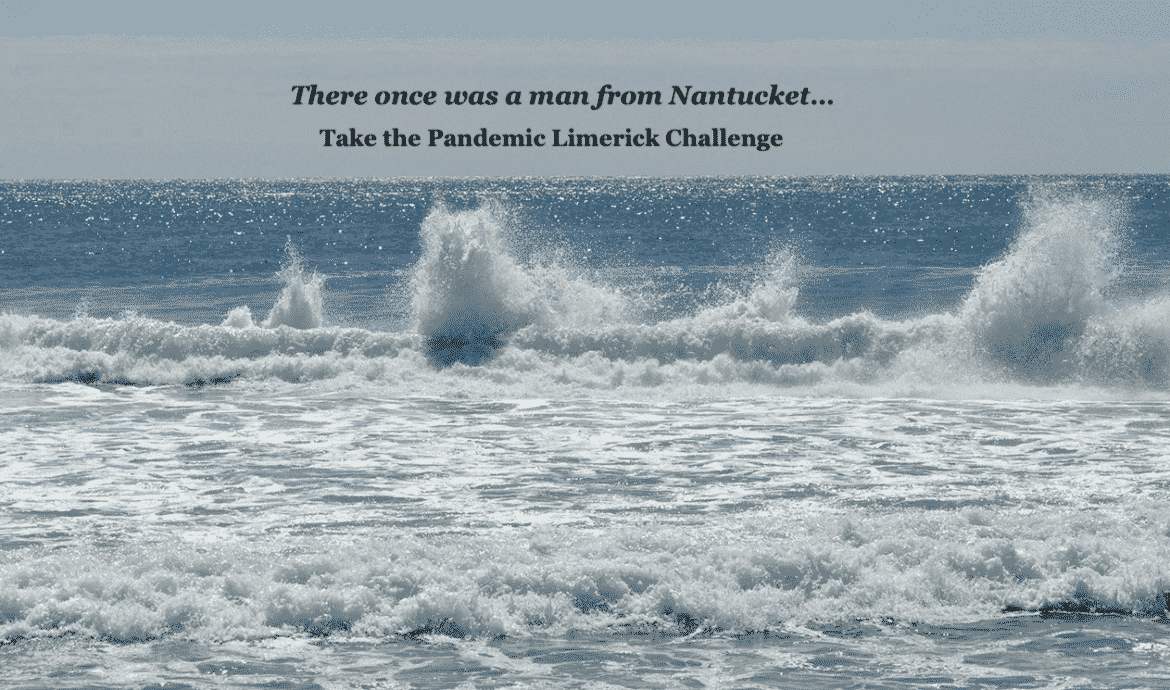 THERE ONCE WAS A MAN FROM NANTUCKET…

For decades, Yesterday’s Island/Today’s Nantucket (now celebrating our 50th year!) has challenged readers to add to the original Nantucket Limericks. You can read the original series of limericks, here https://yesterdaysisland.com/limerick-challenge/ along with more recent additions.

During the difficult circumstances of the pandemic, we think that people can use a little laughter and creativity, so we challenged our readers to submit new chapters of this Limerick Challenge about life on Nantucket during the pandemic. Here are some of the best that were submitted. We hope you enjoy them as much as we do, and that they make you smile.

There once was a man from Nantucket
Who kept all his TP in a bucket.
When the stores ran out,
He wandered about
Giving squares to all who would tucket.

There once was a man from Nantucket
Who told the apocalypse it could “Suck it!”
So he sheltered at home,
And dared not to roam,
Less he ends up in Hell via hand bucket.
— by Michael Alvarez

There once was a man from Nantucket
Who’s scallop knife was so sharp he could shuck it.
When the high tide rolled in,
And his waders wore thin,
He retreated to the pub and said #$&@ *&.
— by Bob Lyons

There once was a woman from Surfside
Who was all out of rice for her stir fry.
“I’m afraid to go out
To the store,” she did pout,
She called Faregrounds for delivery curbside.
— by C. McConnell

Like everywhere else, in Nantucket
The virus got loose – ran amok, it
Refused to rescind
For those standing downwind,
Oh so many not able to duck it.
— by Doug Harris

But the fellow we know from Nantucket
Has emptied the cash from his bucket
And filled it with bleach
Disinfection to teach –
The way, with a virus, to chuck it.
— by Doug Harris

Nantucket’s an island we know
Where plenty of summer folks go.
But during this spring,
We’re all sheltering,
So hope not to see them now, though.
— by Mary Longacre

They said “stay at home” in Nantucket,
Yet out to the beaches we truck it.
But I ask your assistance,
In keeping your distance,
There’s just one roll left, I must pluck it!
— by Richard Pykosz

And the rather mysterious “Portly Bard” penned a series of 8 limericks to share:
There once was a man from Nantucket,
Who toted an alcohol bucket.
So a hand he immersed
Would no longer be cursed
By COVID done in where he stuck it.

‘Twas a story folks loved to retell
So he built and filled buckets to sell
And acquired his wealth
By preserving our health
Doing business as “Alco-Haul Well.”

And that led to hermetically sealed
Sterile wipes to dry hands he had healed,
That he cleverly made
So they’d biodegrade,
Which he knew to so many appealed.

It was anchors aweigh as we say
For his profit on opening day.
When crowds began telling
The world he was selling
“Nan-Tuck-It-and-Chuck-It-Away!”

But it didn’t end there, he was part
of Nantucket’s historic restart
When he proved from a barrel
He could fashion apparel
That would keep us together apart.

Even Paris said “C’est magnifique!”
To the billow of clothing unique
And the profit so bloated
At Nantucket’s now noted
“Social Distance Insistence Boutique”.

To his swimwear, reaction ecstatic
Seemed to flow from the liners pneumatic,
A life-saving design
For those braving the brine
With a confidence far more emphatic.

So with marketing sense rather smart–
By appeal to the beach-going heart  —
With his suits labeled “DareWear,”
That featured safe “AirWare.”
He had sales going off of the chart.

There once was a man from Nantucket
Who saw covid was on Town docket
He said to his friends
Hope this nightmare ends
And we all end up back with “Our Tucket.”
–Sent in by Jennifer Satterfield

During the time of the plague on Nantucket,
Some from America decided to chuck it.
They sheltered in place
On this clean wind-swept space,
Wearing Nantucket Red masks to duck it.
–Sent in by Rod Starbuck Learned