USS Nantucket Will Be the US Navy’s Newest Warship 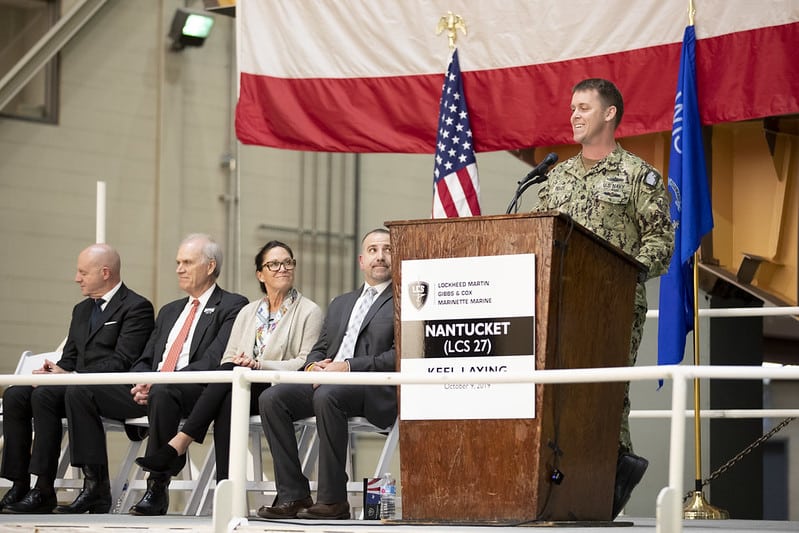 Nantucket has a long, rich history, and naturally much of it is tied to the ocean. Being 30 miles off the coast, the island was one of the sailing capitals of the world.  Whether it was whaling, shipbuilding, travel, or trade, our tiny island played an essential part in life at sea.

That history is still being written, of course, and yesterday the world added a new page with construction starting on the USS Nantucket.  The US Navy’s newest warship, being built by Lockheed Martin, will be unlike any other ship in fleet.  A Freedom-Class Littoral Combat Ship, or LCS, will be a small but agile, speedy warship.  Designed for missions closer to the shore, it will be the 3rd in a line of naval vessels bearing the same name.

“The USS Nantucket will confront many complex challenges,” said Richard V. Spencer, the U.S. Secretary of the Navy. “It will confront humanitarian relief all the way to great power competition, drawing on the strength of every weld, every rivet applied by the great people here.”

Smaller than a frigate but larger than patrol ships, LCS have the capabilities of a small assault transport including a flight deck and hangar, a stern ramp for small boats, and the cargo volume and payload to deliver a small assault force with fighting vehicles.  LCS can serve on a multitude of missions including surface and anti-submarine and mine countermeasure. The ships are built for speed and adaptability.

Her sister ship, the USS Freedom, is the lead ship of the Freedom-class of LCS and was commissioned in 2008.  Based in San Diego, the ship has two crews alternating four-month tours of sea duty. The USS Nantucket will be the 14th Freedom-class LCS and will join a class of more than 30 ships. It is one of six ships in various stages of construction and test at the Fincantieri Marinette Marine shipyard.

On Wednesday, October 9, the Keel Lay ceremony took place.  Marking the start of the ship’s construction, it is a ritual that has been carried out in Navy ship building for hundreds of years. Polly Spencer, wife of US Secretary of the Navy Richard Spencer, had her initials welded onto a steel plate.  The future USS Nantucket will carry Polly’s name on her hull throughout its life at sea.

“I have been given a very special honor in being the sponsor of the future USS Nantucket. I am happy she is being built here in Marinette, Wisconsin, which has an impressive history of shipbuilding,” said Polly Spencer. “Thank you to all the talented people who are bringing this ship to life.  It is going to be an amazing journey that I am thrilled to be on.”

Try It Out Tuesdays with the Artists Association of Nantucket