A Honey of a Hobby

Giddily we break out our picnic baskets, yellow hats and antique cars. We hug friends we haven’t seen in months, and the sun offers its first bashful smiles to us. But we aren’t the only ones dizzy over daffodil season. Our least obtrusive and most important island neighbors rely on daffodils (and the rest of their bulb cousins) for early season pollen and nectar. While we’re busy relaxing in ‘Sconset, Nantucket’s honeybees are buzzing with anticipation.

Despite not getting an invitation, honeybees usually end up at our Daffy Weekend picnics. (“Hey, guys! Free sugar!”) Not so fast with that flyswatter, though. By now, most of us have heard that honeybees are in trouble. In the mid 2000s, beekeepers worldwide began reporting atypical population depletion within their colonies. Dubbed Colony Collapse Disorder (CCD), the reduction is believed to be partially due to agricultural pesticide use. Though the whole of CCD’s causation remains undetermined, we do know this: our planet needs bees. According to the USDA, one-third of our favorite foods are reliant upon bees’ cross-pollination activities, not to mention the annual $15 billion of U.S. agricultural assets that are tied up in bees.

For bliss, benevolence, and of course, bounty, a few Nantucketers have taken to keeping bees on their property. Scientists agree that the presence of bees causes greenery to flourish, flowers to grow more vibrant, and vegetables and herbs to increase their yield. When bees roam freely and gather a variety of pollen, the earth behaves as she should. And as for you? You, my friend, get your own honey. Everybody wins. If you want your own signature honey but aren’t so keen on executing the nitty-gritty, many island beekeepers will install and maintain your hive for you. Honeybees are hardy year-round residents of Nantucket. They hibernate through the cold months; so even if you spend winter elsewhere, your fuzzy friends will remain safe, sound, and ready to greet you the following spring. 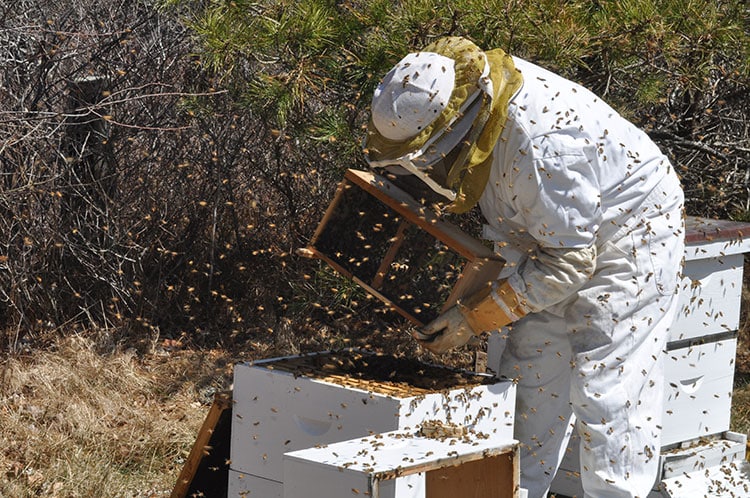 Unfortunately, many of us (including this author) have been traumatized by media portrayal of “killer bees.” According to local bee experts, such depictions land miles from reality. Nantucket beekeeper Sunny Daily says, “Bees are not aggressive; they’re docile by nature. They keep to themselves because they’re so busy.” David Berry, owner of Nantucket Honeybee, offers some insight: “Yes, bees can sting. But if somebody broke into your house, you’d get upset. Don’t harass a beehive, and bees won’t bother you.”

Nantucket’s rugged, unrestrained landscape lends itself to bountiful flora, making the island an ideal home for honeybees. And the purity of island honey is incomparable. Daily attests to this: “Nantucket is unique in that we don’t have factory farms putting out massive amounts of harmful chemicals. We don’t have to worry about genetically modified crops tainting our honeybees’ pollen sources.”

Since honey is produced from the nectar of flowers, its taste and color changes with the seasons. Nantucket’s spring blossoms (such as our guest of honor this week, the venerable daffodil) produce a light, flowery honey; whereas fall brings a dark, rich honey made from the likes of ragweed and goldenrod. As Nantucket beekeeper Joe Manning puts it: “Spring honey is like a lager; it’s light amber. Come autumn, you’re getting a dark stout; the Guinness of honey.”

Manning, a roofer by day, cites a simple incentive for beekeeping: he likes honey. It’s a good thing, too, since he estimates that a decent hive produces 100 pounds per year. Also, Manning swears by the allergy-assuaging faculties of local honey. Severe allergy sufferers practically sneeze upon hearing the word “ragweed.” Theoretically, ingesting tiny bits of your body’s least favorite pollen can build your immunity against that allergen. Manning says just a spoonful per day can keep your sinuses smiling all season long.

Honey and home allergy remedies aren’t the only benefits of having your own beehive. Daily says, “As I raise my son, I like to show him that food doesn’t just come from the grocery store. We all know that, but actually doing something to demonstrate that fact is really powerful.” She situated her beehive alongside her garden, safely behind a fence where it will not be unintentionally encountered by playing children. Carl Keller and Tori McCandless, owners of Boatyard Farm, a new local honey producer, also love having honeybees on their property. “They’re very calming, actually,” says Keller. McCandless adds, “Knowing that you’re contributing to Nantucket’s ecosystem and the reestablishment of the natural order. That’s a good feeling.”

Daily leads bACKyard Beekeepers, a group that gathers at the UMass Field Station on the first Sunday of every month from 11 a.m. to 12:30 pm. Each meeting, which usually includes about 15 people, covers a loosely organized beekeeping topic. Daily says, “We are fortunate that we get at least two or three highly experienced beekeepers at every meeting. It’s a real community. Once you meet somebody who knows how to keep bees, it’s not that hard. The only thing that holds people back from beekeeping is their fear.” The group is open to anyone with any level of interest in bees. For details, Daily welcomes you to contact her at 508-333-7105.

Imagine bringing your own honey to next year’s Daffodil picnic. Picture a jar with your family’s name on it. “This is from our bees,” you’ll say with a proud grin. “Want to try some?”

We Asked Nantucketers What They Appreciate about Their Mothers