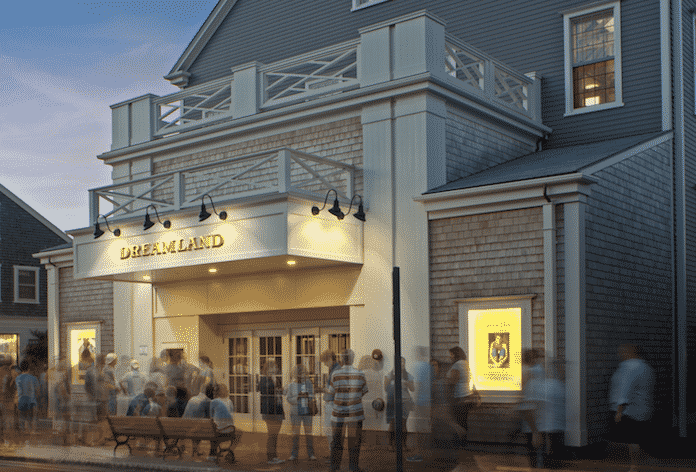 Thanks to a generous donation from Bari Lipp Foundation, Nantucket’s Dreamland will provide all live broadcast programming from New York’s Metropolitan Opera, London’s National Theatre, and Moscow’s Bolshoi Ballet, free of charge to Nantucket’s senior and student populations, beginning in January of 2019.

“We are so thankful for this generous gift from the Bari Lipp Foundation,” said Joe Hale, The Dreamland’s executive director. “This program has been a favorite among many theatre lovers on Nantucket for several years now, and this gift ensures that the program can continue to grow and expose more and more of our residents to world-class productions from around the globe.”

Established when The Dreamland opened its doors for the first time as a nonprofit in 2012, the live broadcast program was initially made possible by a grant from the Nantucket Arts Council to install two satellite receivers on the roof of The Dreamland’s 17 South Water Street facility. Since then, the series have run September through May of each year, with encores and special presentations during the summer months.

The Bari Lipp Foundation’s gift has already been put to good use in 2018, having sponsored the senior class at Nantucket High School to attend a special screening of Shakespeare’s “Hamlet”, starring Benedict Cumberbatch and produced in London’s South End as part of the National Theatre’s 2015 season.

Those now eligible for free admission to broadcast programming include all current students with a valid student I.D. (high school through college), and those 65 years of age and older. The Dreamland looks forward to engaging the communities at Our Island Home, the Saltmarsh Center, and Sherburne Village, and other island organizations in the weeks and months to come.

The first eligible screening of 2019 will be the Metropolitan Opera’s production of “Adriana Lecouvreur” on Saturday, January 12th, featuring Soprano Anna Netrebko who joins the ranks of Renata Tebaldi, Montserrat Caballé, and Renata Scotto, taking on—for the first time at the Met—the title role of the real-life French actress who dazzled 18th-century audiences with her on-and offstage passion. The soprano is joined by tenor Piotr Beczała as Adriana’s lover, Maurizio. The principal cast also features mezzo-soprano Anita Rachvelishvili and baritone Ambrogio Maestri. Gianandrea Noseda conducts. Sir David McVicar’s staging, which sets the action in a working replica of a Baroque theater, premiered at the Royal Opera House in London, where the Guardian praised the “elegant production, sumptuously designed … The spectacle guarantees a good night out.”

Stay tuned to The Dreamland’s schedule as titles will be added as they become available. Live broadcast start times are subject to change and are outside of the control of The Dreamland.  Those looking to take advantage of the new program can purchase their tickets online or at the Box Office.

Open year-round, The Dreamland relies on the Nantucket community and giving organizations such as the Bari Lipp Foundation to remain open and continually bring engaging and exciting programming to Nantucket’s shores.

A registered 501(c)(3) nonprofit organization, the Dreamland builds community on Nantucket year-round by bringing people together to share experiences through art, culture, film, and learning. For more information about becoming a member of the Dreamland, or to learn more, visit us at www.nantucketdreamland.org

A Night View of Nantucket at Christmastime