A Nantucket Alternative to Trimming the Tree 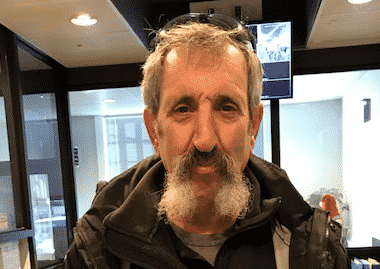 For the first time in the history of Nantucket’s Christmas Stroll, crowds will gather at 11:30am in the Harborview Stop-n-Shop parking lot amidst the Chamber’s Christmas Marketplace to watch as our esteemed sheriff gets shorn.
Sheriff Jim Perelman, in a “personal fundraising act” has volunteered to have his magnificent mustache shaved in public to benefit Fairwinds – Nantucket’s Counseling Center.  This promises to be quite an event, as no one has seen Jim without a mustache since 1970. “I was almost born with it,” he commented, “I just let it grow and never cut it off.”
The idea for this fundraiser was proposed a few years ago, when Sheri Perelman was on the Fairwinds Board of Directors.  “We thought about gathering a bunch of men on-island with facial hair and doing a big event,” she explained.  Still on the Fairwinds Advisory Board, Sheri kept the idea alive, and this year Jim just said “Let’s do it.”  Since the decision, to make the endeavor even more worthwhile, he’s been growing his “cowboy style” stache into more of a “Hulk Hogan horseshoe.”
Since they announced the event, it has raised $3,000 for the island’s oldest and largest non-profit mental health and substance abuse agency and counseling center. “We’re hoping to at least double that,” said Sheri, “the money raised is going for services at Fairwinds…we don’t turn anybody away.” “This goes a long way for us,” added Paul Keeshan of Fairwinds. 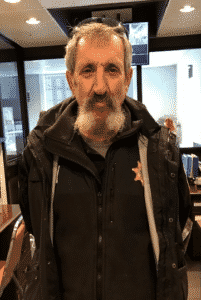 This Saturday, just before Santa’s arrival, Sheri will sharpen her electric razor and have at it, with the encouragement of a cheering audience. Asked if he is feeling nervous, Sheriff Perelman bravely said “no, I’m not the one shaving it.”  Sheri may experience a bout of nerves, but as she commented: “fortunately it’s an electric and not a straight razor.”
With the weather on Saturday predicted to be clear and cold, Sheri was considering getting a Santa beard to keep Jim warm after losing his long-time lipholstery, but she confessed that she has run out of time.
We asked Jim if he was a bit concerned that we islanders may not recognize our illustrious sheriff after he’s shorn, and he replied with a chuckle. “They won’t… I’m gonna get away with stuff for a couple of days.”
Donations (cash, local checks, and credit cards) for this Stroll fundraising event will be accepted downtown at the Fairwinds table on Saturday, as well as online at fairwindscenter.org/donations. Donations by check may also be mailed to Fairwinds, 20 Vesper Lane, Unit L-1, Nantucket MA 02554.
Since 1962, Fairwinds – Nantucket’s Counseling Center has provided comprehensive licensed therapeutic support that fosters mental health through prevention, wellness education, and addiction recovery services. They serve Nantucket individuals and families, with more than 30,000 mental health and substance abuse counseling appointments scheduled annually. For more about Fairwinds, visit Fairwindscenter.org.

Biking Is the Best Way to...

Help Bring Back the Fair on...