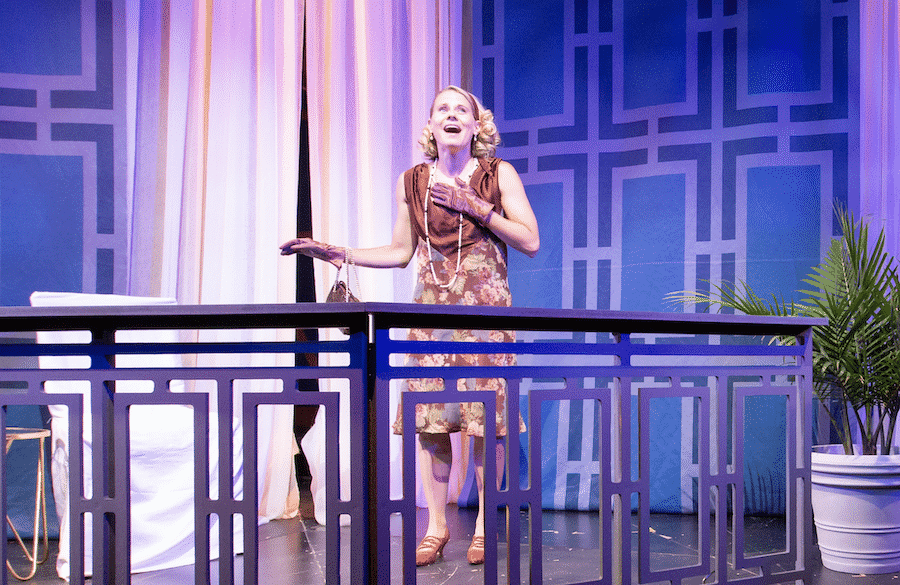 White Heron Theatre Company of Nantucket has an exciting schedule of shows to celebrate its 10th anniversary season, including Dial M for Murder, a killer comedy that preceded the classic Hitchcock film and features Tony Award-winner Celia Keenan-Bolger. The season will also include two highly anticipated new works that were canceled last summer due to a COVID-19 surge as well as a modern masterwork about an American icon. Additionally, White Heron will partner with Nantucket Comedy Festival to offer “The White Heron Comedy Club” on Friday and Saturday nights. Later in the year, A Nantucket Christmas Carol, White Heron’s popular adaptation of the Charles Dickens classic, will return for its last revival until 2024.

“We have a blockbuster lineup to celebrate our 10th Anniversary season on Nantucket,” said White Heron Theatre Artistic Director Lynne Bolton. “We continue our commitment to new work with the world premiere of See Monsters of the Deep and a North American premiere of The Half written by ‘Game of Thrones’ actor, Richard Dormer. Tony winner Celia Keenan-Bolger returns to star in the classic play Dial M for Murder. We will wrap up with a tour-de-force performance of Thurgood, the story of Thurgood Marshall, America’s first Black Justice of the Supreme Court.”

First, White Heron will produce the North American premiere of The Half written by “Game of Thrones” star Richard Dormer and directed by Michael Kopko. This enjoyable piece about life in the theatre follows an actor during his preparation in the 30 minutes before curtain, also called “the half.” The actor, in his attempts to coax himself into the performance of a lifetime, relives the highs and lows of his life and relationships. One of the hits of the 2012 Edinburgh International Festival, audiences will find The Half enormously entertaining and humorous. Performances will begin on June 26 and will run in repertory through July 17.

“The Half is a brilliant, funny work that we have been working to bring to its North American premiere for 10 years,” said White Heron Producing Director and Co-Artistic Director Michael Kopko. “I’m grateful to be working on this wonderful piece with such a gifted and accomplished actor.”

In repertory with The Half will be See Monsters of the Deep, a world premiere written and directed by Mark Shanahan from a concept by Mark Shanahan and Steve Pacek. See Monsters… tells the story of Morton Plank, who ventures out in his small boat named “Courage” to confront a mysterious sea monster lurking in the Nantucket Harbor. He soon becomes part of an infamous prank pulled by the eccentric Tony Sarg. Audiences will experience a delightful fantasy and harken back to the innocence of a simpler time. Performances will begin on June 29 and will run through July 20.

“Nantucket in the 1920’s and ’30’s was a very different place from the island of today,” said Bolton. “See Monsters… takes a journey back in time to the Nantucket we knew as kids. It’s a wildly entertaining story with the mystery and romance of ‘The Summer of ’42’ as well as a coming of age tale that explores the innocence of a forgotten time.”

At the heart of the season will be Dial M for Murder by Frederick Knott and directed by Mark Shanahan. This classic comedic thriller follows Tony and Margot Wendice. Tony has discovered Margot’s affair with a crime-fiction writer, so he sets out to take his revenge and inherit her vast fortune. In true Hitchcockian fashion, plans go awry to comedic and thrilling consequences. White Heron’s production will feature Celia Keenan-Bolger (2019 Tony Award for To Kill A Mocking Bird and currently in “The Gilded Age”) as Margot Wendice. Performances will run from July 26 through August 11.

“One of our favorite actors to grace the White Heron stage is Celia Keenan-Bolger,” said Bolton. “Celia is back this year to lead the company in Dial M for Murder,” said Bolton. “Celia is one of those magical actors who creates a special world where we can all live with her for a few hours. Our intimate venue allows for a unique experience to see this stellar company close-up. If you couldn’t get tickets to see Celia’s Tony winning performance on Broadway as Scout in To Kill A Mockingbird, now is your chance to experience her extraordinary talent. In my opinion, Dial M is a must-see for this season.”

For the close of the summer, White Heron Theatre will present Thurgood by George Stevens, Jr. This masterpiece tells the story of American icon Thurgood Marshall, who successfully argued Brown vs. the Board of Education before the Supreme Court. and later became that body’s first African American justice. Audiences will find Thurgood’s success story to be a riveting celebration of all that is best about our country. Performances will run August 22 through September 1.

“There is no more timely play for this season than Thurgood – the story of Thurgood Marshall, America’s first black Supreme Court Justice,” said Bolton. “This tour-de force will leave you breathless, moved and inspired by an incredible performance and the story of a great American.“

In addition to theatrical productions, White Heron has partnered with the Nantucket Comedy Festival to present “the White Heron Comedy Club,” a destination for great comedy on Friday and Saturday evenings at 9 p.m. throughout the summer. Gary Marino will open the Comedy Club season on July 1 & 2. On July 8 & 9, audiences will laugh along with Steve Sweeney; August 12 & 13 Jack Gallagher will be on stage. The program ends with Tom Cotter on August 26 and 27 and Don Gavin on September 2 and 3.

Our weekend comedy club nights will be a treat,” said Kopko. “Collaborating with our friend Kevin Flynn and the Nantucket Comedy Festival, we’ll be bringing in some top comics. With our lobby bar, this will be a great evening, and Nantucket will at last have a destination for weekend comedy all summer long.

In reflecting on the artists who have made White Heron a success over the last decade, Bolton said, “Our acting company is diverse and extensive—with more than 112 actors who have performed on the White Heron stage over the past 10 years. They run the gamut of Academy Award winners, Tony Award winners and nominees, journeyman actors, students and acclaimed actors from stage and television all working together as members of a company. We celebrate and thank those actors who have worked shoulder to shoulder to build our White Heron legacy.” Tickets for the White Heron’s season are now available for members only: ticket sales for the general public begin on April 27. For additional information, visit whiteherontheatre.org or call (508) 825-5268.