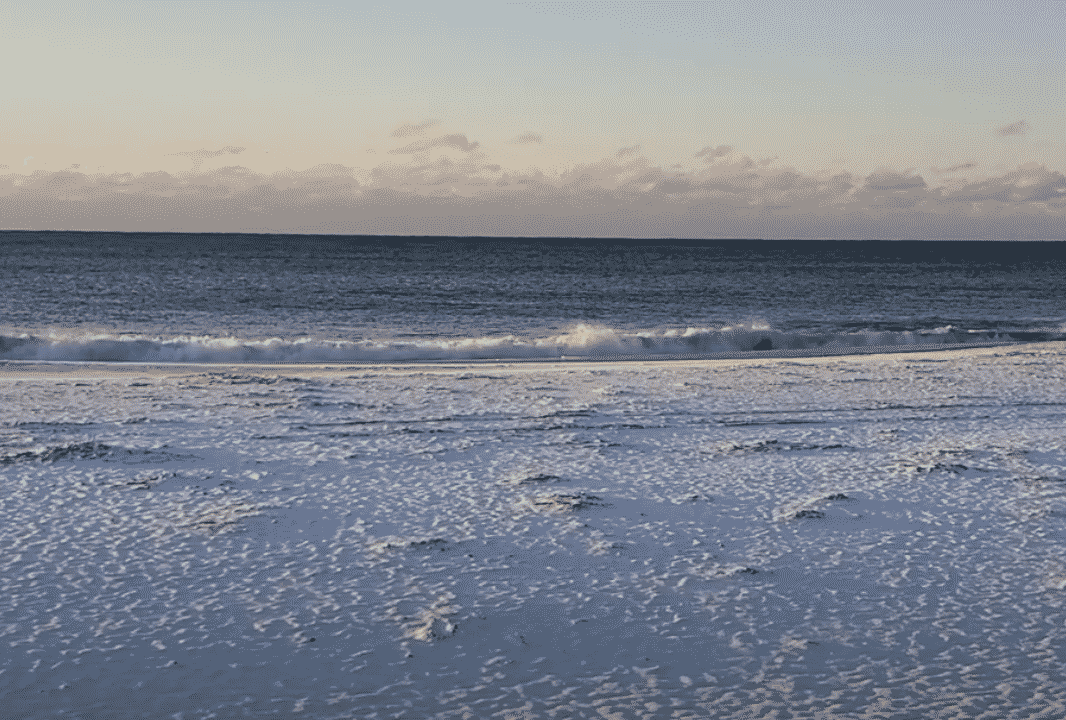 Winter comes to Nantucket on a northerly gale.  The sky descends to a few feet overhead, the clouds somersault, and the wind flings sand.  If the wind is of a particular mind, the temperature nudges below freezing and the fellas in their shorts and “Let’s Go Brandon” sweatshirts start rethinking their life choices.  The air feels about ten degrees colder than it does in other spots.  In the mountains, a day in the thirties comes crisp and clear, with just a hint of melt and a sparkling sun glittering off of warming snow.  Out here, on the brink of land, it comes with darkness, wind, and wet.  You can stand on the docks and watch the wind coming in atop whitecaps and carrying ocean effect snow.  Then you duck inside.

The workers know this.  They huddle in a line up the wharf, clad in layers of sweatshirts, carharts, and stocking caps.  They shift foot to foot, look out, and wait to leave the ocean effect.

The boat brings the workers over in Carharts and sweatshirts then sends them back at four o’clock with cigarettes and empty lunch boxes.  When the job site closes, Nantucket has no place for its workers.  On a Saturday in January & February, one man will man the job site.  He is finishing a window, nailing down a few more shingles, or just cleaning up.  But he will stay there, as the snow blows around him and the horizon shrinks.

The winter strips the island naked; the ocean effect blows through our bones.  We are left with arms crossed, bare with our skin tags, scars, and cellulite open to the world. We have no excuses to the wind.  The trash, left in a can in September, has blown around the parking area, has been caught in the bare arms of Rosa Rugosa and flutters its corporate flag to the gulls.  Windows, carefully hidden by landscaping and foliage, glow out on the street, if inhabited.  Even the darkened houses cannot hide their interiors.  We have no warm water embraces, no following winds, no gentle fogs.  In January, the wind and water measure the centuries, not you.

Downtown, Christmas trudges on.  Santa and the reindeer loiter in the windows, with big golden balls, and flowing red ribbons fading and coming loose in the January wind. Ralph Lauren celebrates silver Christmas in January snow.   The “Seasons Greetings” remain after the season has fallen silent and the lights are off.  On the other hand, the fifty percent off sales tick by, bringing something to do for the afternoon.  Both sides of the street are lined with five- and ten-year-old pickup trucks and jeeps looking for a bargain on a shawl or a present for the mother-in-law.  The cobblestones will be empty by sundown.

We bounced up Main Street, lined with dark houses.  The  Christmas garlands finally got their frosting of winter.  At the land waves of the Quaker Cemetery, the squall picked up and swept through the pious friends in eddies and swirls.  On any other winter day, the field is Nantucket brown, bordered by green, under a blaze of blue (or gray).  But in the wind, it faded into white.

The Madaket Road led us into a quiet and cold past. No other cars came back to town, nor did any follow us out.  Instead, we drove beneath a jury of starlings, clinging to the wire.  After we passed the water tower, four deer burst through the underbrush and jogged down the middle of the street.  We slowed behind them, but like bicyclists, they pretended not to notice us.  Fifty yards later, at a signal, they bounded over the fence and into the landscape.

We were sociably alone at the dump.  We parked where we wanted, nodded to the other cars, and were able to put out plastic bottles and our pizza boxes in the right chutes without incurring instruction.  The “Take it or Leave it” was finally open.  It has new shelves, cubbies, a clean set of windows, and clothing spread on three different tables; one each for kids, men, and women.  I poked through the books while my son looked for DVD’s and videocassettes.

By the old shoes, two old acquaintances recognized each other.  He leaned significantly on a cane, while she had pulled her hat down tight, then fastened her hood over it.

“Sure.  It must be all right if we can remember worse.”

They smiled and moved to the books.  I left the two of them to the spines, the back covers, and the sweatpants.

With a new DVD, a shopping bag, and the Seamus Heaney translation of Beowulf, we continued to the far edge of the island.  The ocean, on the south shore, pretended to be a lake.  The snow continued its battery while, a half mile off shore, the rays lit the still water.   Naked and still, the ocean waited.  Not for me, or for anyone else with an expiration date, but perhaps the wind and the tide.  All of its life hid beneath the reflected gray sky.  The snow pellets got caught on the seaweed and the footsteps, spraying out from imperfections in swirls and spirals.

At the landing, the harbor and the creek remained as still and as silent.  The moorings were empty, the water was calm, and one landless bird circled far overhead.

One can have too much of winter here.  The naked truth of the island remains cold, damp, and windy.  All summer, it dresses itself in flowers, work aprons, and Lily. Time stops in the Chicken Box line, and it will be 19 forever while the winter measures time on a boat schedule, a tide chart, and a barometer.

Human time is different. The boy and I stepped into the swim meet.   Our time comes over on the boat with all of her friends on the swim team.  It gets measured in afternoons, and then in minutes and seconds and tenths of seconds of cheering and yelling at the pool.  We were young, we were warm, we were sprinting down the lane without a breath in the summer bubble of a race.  The ocean effect, in winter, brings us to each other, be it in the pool, at the store, or at the Chicken Box.  Winter can stay outside and measure the slow tick tock of the tide.  Inside the bubble, we celebrate the vital tenths of seconds of youth.

Plan Now for Summer Fun for Your Kids on Nantucket Island

Nantucket’s One Book, One Island selection for 2022 is “The Midnight Library”