Spring cleaning often uncovers little surprises you forgot you stashed in the basement, but it doesn’t usually uncover something as rare and valuable as what staff at the Maria Mitchell Association discovered this winter.

During the relocating of books and old library-related equipment from the basement of the former Maria Mitchell Library, a stack of rare nautical maps entitled, “A Sailor’s Map of Nantucket” resurfaced.  The stack of paper maps were resting on an old trunk tucked away in a back corner.  Several sixth grade volunteers assisting with the clean-up were given the task of moving the bundle of maps up to the main floor.  In the bright main room of the former library, the map details came to light.  With a copyright date of 1945 by R. Newton Mayall, the maps feature Nantucket Harbor and some of the surrounding streets and interesting features of the day.  The map includes an interesting “Useful Information” section highlighting “Winds, Fog Signals, Distress Signals,” and so on.   The map is based on “USC and GS Charts and Bulletins; and Ashworth Aerial Survey.  Additional data was obtained from USGS Brant Point, Town Records, and Field Checks.”

According to Jascin Leonardo Finger, MMA Curator and Deputy Director, the MMA once sold these maps and over time the stack slowly got pushed back as other items were stored in the same area and people forgot about them. “But now, we are happy to re-offer them for sale as they are truly a unique and historic map that have a great tie to the MMA as well.” 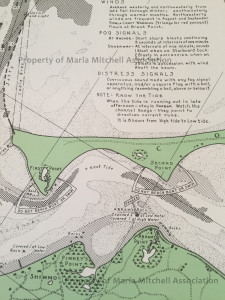 Mayall was a landscape architect and he met his wife, Margaret, on Nantucket in the 1920s when she was working at the MMA for its Astronomer and Director of the Observatory, Margaret Harwood. Margaret Mayall had worked for Annie Jump Canon, a renowned astronomer, previously and would later become director of the American Association of Variable Star Observers. The Mayalls together wrote many books for amateur astronomers and Newt wrote several on his own as well, including about sundials.

“The unearthing of these maps is really wonderful and they are truly a collector’s item that anyone with an interest in old maps, nautical maps, sailing and boating, Nantucket, or even the books by the Mayalls would want to have,” Leonardo Finger stated.

The MMA will make these maps available on a first-come, first-served basis. They will retail for $200.00 each and proceeds from the sale will go to support the preservation of rare Nantucket biological collections at MMA.

Oliver Stone to be Honored at Nantucket Film Festival