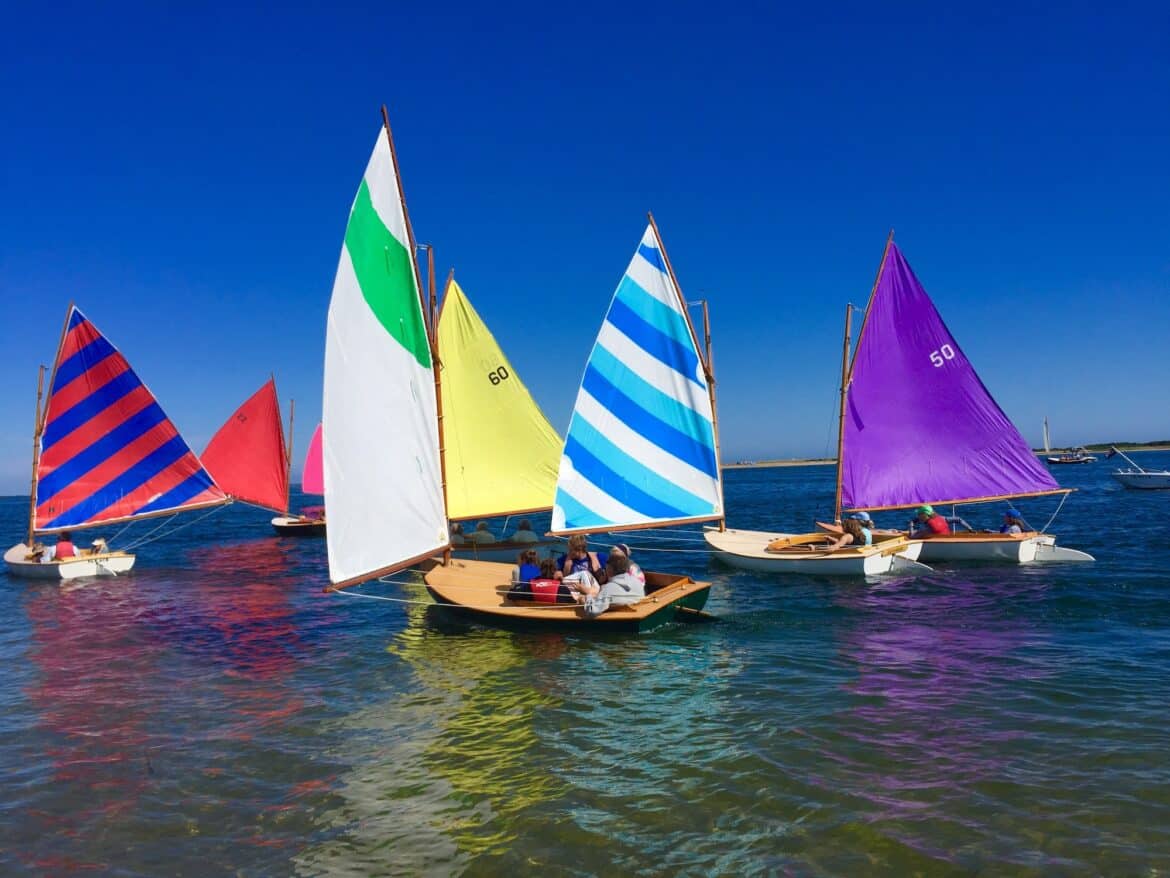 This Sunday, August 21, the eagerly anticipated Rainbow Parade will sail around Brant Point, preceding Nantucket’s 50th Annual Opera House Cup Regatta.  It’s typical for twenty or more of these little boats to participate in the parade.  Some years ago, the parade date fell on a stormy day, complete with 25-miles-per-hour winds.  Still, one stalwart sailor mustered courage and strength, getting her miniature sailboat out on the water.

Since the mid 1800s, the catboat has been a favorite on Nantucket for leisure sailing and for teaching children how to sail.  When the Nantucket Yacht Club was founded in 1906, they organized races and encouraged members to buy boats of the same design to eliminate the need for handicapping.  In 1910, the club commissioned the design of a 13-foot catboat as a “one-design” for racing.

In 1921, the Yacht Club under Commodore Henry Lang and Vice Commodore Clarence Gennett commissioned a one-design fleet of 16-foot catboats for young members.  According to historian Michael Harrison, “it was Gennett’s idea that the boats wear sails of different colors to distinguish them, and the lively effect this created immediately led to the name “Rainbow Fleet.”

These 16-foot catboats had issues of maintenance and some difficulties in handling when running before the wind.  “Now these big Rainbows were lovely, very graceful looking,” reminisced the late Helen Wilson Sherman in a past interview, “but there was no ‘body’ in the stem, so they were quite tippy; they heeled easily in the wind.”  In 1927, smaller, lighter catboats were ordered.  These Beetle Cats (designed and built by the Beetle Company in New Bedford) were easy for children to handle and very popular throughout New England.
Harrison states in an article: “The new “Little Rainbows” formed a class of their own sailed entirely by children.  A racing report from July 1927 notes, The Little Rainbow Fleet has proved itself a fine class and everyone is proud and happy.  Master Cutler won on Wednesday, sailing a fine race and the whole fleet congratulates him.  Miss Smith had hard luck with her tiller.  Miss Gennett and her brother made a gallant fight but succeeded in coming in second.  Miss Helen Wilson won an easy third and hasn’t got over the thrill yet. The poor old Rear Commodore hit a shoal and never came in at all.

A photograph taken by H. Marshall Gardiner in the late 1920s and released as a postcard in 1930 inspired the concept of a Rainbow Parade.  The artistic piece shows ten Rainbows—green, deep yellow, red, old rose, blue, light yellow, and tan—rounding Brant Point.  How were the boats so neatly lined up?  The boats were actually interconnected and the photographer, along with Vice Commodore Strong, chose a day when waters were very calm.

“It was an absolutely perfect day for it.  When Marshall Gardiner took his picture,” the late Helen Wilson Sherman explained, “color photography hadn’t really been invented, so the picture was black and white…and when they tinted it, they didn’t know what color the sails were, and mine came out orange instead of green… I was at the head of the parade…everybody’s boat was tied to mine and Byron Coffin towed the 13 boats in the Yacht Club launch—we weren’t sailing.  It was a dead calm.  And of course all the little sails were straight, and they weren’t fluttering or anything.”

Over the decades, there has been casual parading of the Rainbow Fleet.  It wasn’t until Alan Newhouse, NCS Founder, came along in the 1980s that the Parade became formalized as an event within the Opera House Cup.   He brought the whole Rainbow class of boat back to life.  It had almost disappeared on Nantucket in the late 70s.

Newhouse sought Parade participants in a creative manner several weeks before each year’s event.  Having assembled ziplock bags containing stones for weight and notes for explaining the date and time of the Rainbow Fleet Parade, Alan deposited his messages in every Rainbow he saw in the harbor.  Today, the ziplock bag messages are still dropped into boats.  The small gesture is representative of inclusiveness.  Traditions like these characterize the Rainbow Fleet Parade.

During the Rainbow Parade, it’s common for different generations to be sailing in these boats: young kids to grandparents.  Many of the Rainbows have been passed from generation to generation.  Among the families to originally own the boats were the Pagons, Connells, Bollings, Lovelaces, Sawyers, Churches, Heckers, and Manvilles.  Today, more families are active in the Rainbow Fleet Parade.

According to Diana Brown, President and CEO of Nantucket Community Sailing, Tall Ship Lynx will shoot her cannon at 9 am on Sunday morning, August 21, “and that will start the parade.  We will have an expert on Brant Point identifying the boats as they parade by and a brochure with descriptions and photos of each boat.  We are doing a pursuit start this year, which means the slowest and smallest boats start first, beginning at 10:45, so they will have to leave the harbor early in order to get out to the race course on time.  The window for the Rainbow Parade is very tight to avoid ferry traffic as much as possible.”

Watching the Rainbow Parade and followed by the majestic wooden boats that sail around Brant Point and out of the harbor on Opera House Cup to compete in this all-wooden, single-hulled classic boat regatta is a beautiful summer spectacle and a Nantucket tradition.

Insider’s Tip:
The Rainbow Parade has a huge following, drawing hundreds to Brant Point to watch and photograph the colorful event.  Spectators should plan to arrive around 8:50 am (or earlier).  You’ll see the Wooden Boats start to pass Brant Point around 9 am till after 10, and the Rainbow Parade around 9:40 am.  Park in town or bike in, stop by Easy Street Cantina (opens at 8 am) or The Corner Table for coffee and a picnic breakfast, and walk to the beach, as parking is very limited.
Can’t make it to the beach? Follow us to see the 2022 event @nantucket_insider

Biking Is the Best Way to...

Help Bring Back the Fair on...