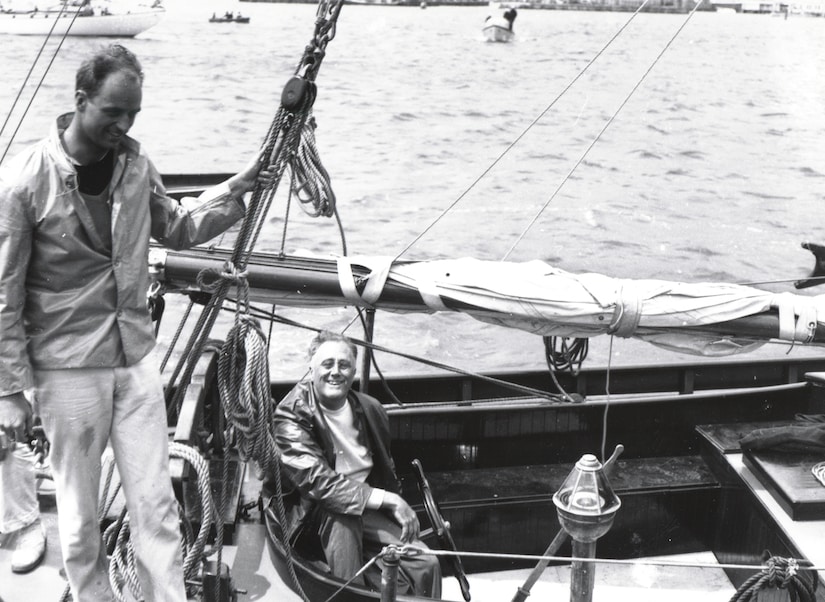 Nantucket has been a favorite vacation spot for well over a century.  With today’s high-speed ferries and commercial flights to Nantucket, it’s much easier to reach our Faraway Isle, but the challenge of getting here did not stop visitors during the 19th and 20th centuries—in fact, it was an appealing aspect to Nantucket.  There was a summer Actors’ Colony in Siasconset from the mid-1800s through the 1920s and an Artists Colony downtown Nantucket starting in the early 1900s.  And if you include being on a yacht docked in Nantucket waters as “visiting,” then ten United States Presidents have visited Nantucket Island since 1835.
**See below for an update on this article — twelve presidents have visited us…

John Quincy Adams, our 6th president who served from 1825-1829, visited in September of 1835, when he and his son spent an afternoon on-island with James Athearn.  They spent one night in a hotel on Main Street called Washington House that was owned by Athearn and run by Elisha Starbuck, town sheriff.  According to the diary of his son, who described the hotel as “a very indifferent one kept by a man named Starbuck.” The next night they stayed at lodgings offered by Betsey Cary in Siasconset.  Charles Francis Adams had a good report of what they found here: “We returned to the neat inn where we had ordered dinner…The dinner was neat and composed of Nantucket dishes – chicken chowder, pumpkins dressed in the shell and corn puddings. Fish could not be procured in time. The neatness of everything was remarkable.”

Ulysses S. Grant, our 18th president who served from 1869-1877, visited Nantucket in August of 1874.  He arrived at about 9 am August 28 on the steamship River Queen, and disembarked at about 10 am to enthusiastic cheers.   The Inquirer & Mirror reported that “As the party fairly turned into the Main street the carriages passed between two lines of children from the Sunday schools, who gleefully waved their handkerchiefs and fairly stormed the Presidential carriage and its occupants with bouquets.” President Grant and his party feasted on turkey, chicken, roast beef, lamb, ham, tongue, salads, lobster, dessert, fruit, wine jellies, and ice cream at the Ocean House (now the Jared Coffin House).  As he returned to the steamship, Mr. Sanford briefly lost control of the horses pulling the carriage in which the president was riding.  Once control was regained, President Grant opted to “trust their feet for the remainder of the distance.”

Chester A. Arthur, our 21st president who served from 1881-1885, visited Nantucket in September of 1882.  He arrived at Steamboat Wharf at 12 noon on September 7,  visited several residents, stopped by the Pacific Club Rooms, and then traveled to Surfside on the Nantucket Railroad.  Upon returning to town, he visited the Atheneum and then returned to the home of F.C. Sanford.  President Arthur left that evening at 5 pm.

Benjamin Harrison, our 23rd president who served from 1889-1893, visited Nantucket in August of 1890.  President Harrison traveled to Nantucket aboard the naval flagship Baltimore and arrived unannounced.  According to the Presidential Issue of the Nantucket Historical Association’s publication Historic Nantucket (December 2010): “Early risers on the Cliff…when they looked out upon the waters of the sound, were greeted with a spectacle that is very unusual in these parts… as the fog lifted the glistening sides of the flagship Baltimore, with her formidable guns pointing shoreward were recognized.

“The news spread like wildfire through the town, and early in the forenoon Steamboat Wharf bore more the appearance of a holiday than of the Sabbath. Boats were eagerly sought, and the harbor presented a lively aspect, the little catboats spinning out under a stiff breeze with curious crowds…Shortly after noon the President…came on shore, and…took a short drive about town, and then to Siasconset, where a call was made at the residence of Senator Spooner.”

Woodrow Wilson, our 28th president who served from 1913-1921, visited Nantucket in September of 1917.  He was traveling aboard the presidential yacht Mayflower with his wife.  They visited Nantucket to see their grandchildren and daughter, Frances B. Sayre, who had a summer cottage in Siasconset.  The Nantucket School Superintendent dismissed students early that day to see the president.  The president and his entourage departed from the Athletic Club pier at about 10 pm, where crowds gave him a “rousing ovation.”

Franklin Delano Roosevelt, our 32nd president who served from 1933-1945, anchored his yacht Amberjack II in Nantucket Harbor in June of 1933, when his cruise to his summer home in Campobello was rerouted due to a storm. President Roosevelt did not come ashore, but his son James did and toured the Whaling Museum.

John F. Kennedy, our 35th president who served from 1961-1963, also did not set foot on our island in 1963 when his presidential yacht Honey Fitz anchored here.  His children John and Caroline came ashore with Secret Service, and they toured the Whaling Museum and stopped for ice cream.

William Jefferson Clinton, our 42th president who served from 1993-2001, visited Nantucket in August of 1999, when they came to the home of Bob Matthews and attended a fundraiser for Hilary Clinton’s campaign for U.S. Senate held at the Bagley home.

President Joseph Robinette Biden, our 46th president elected in 2021, has visited Nantucket with his family nearly every Thanksgiving since 1975.  For many of those years, Biden (then Senator Biden or Vice President Biden) attended the Nantucket Tree Lighting on Main Street and participated in the Cold Turkey Plunge fundraiser for the Nantucket Atheneum at Children’s Beach.

Now serving as President of the United States, Biden’s 2021 Thanksgiving visit to Nantucket was marked by a significant increase in security, more reporters and photographers, and more attention by local residents. He and his family still strolled around town, shopped in island stores, and attended the annual holiday tree lighting on Main Street the evening after Thanksgiving.