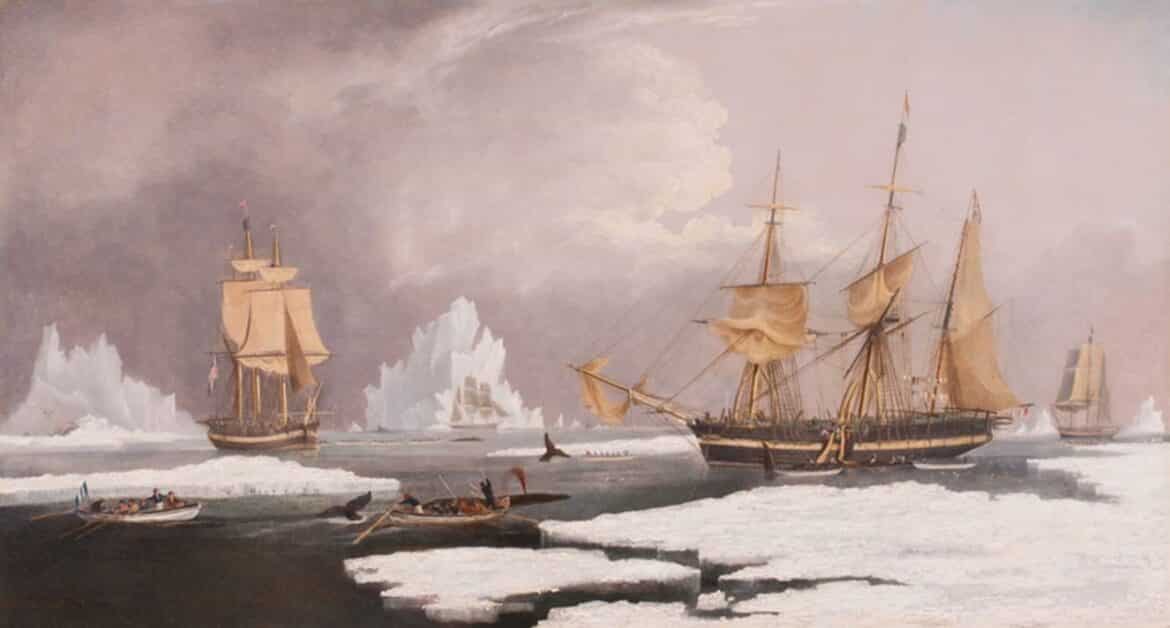 The Trustees of the NHA announce the acquisition of Milo Calkin’s memoir documenting his time aboard the Nantucket whaleship Independence, an Albert C. Gardner tooth, and the painting Northern Whale Fishery by William John Huggins. These three acquisitions round out an enormously productive year in investing in the NHA collection and bringing important artifacts back to the island for all to enjoy.

Milo Calkin’s memoir fills a gap in the Research Library logbook collection. The Independence completed five voyages out of Nantucket before its final voyage in 1833, and the Research Library held no records for any of them.
This volume not only describes the ship’s final voyage and its foundering in the South Pacific, but it also provides a colorful example of a young man with limited prospects joining a Nantucket whaling vessel in an effort to change his fate. Containing stories of his life at sea, the journal’s passages depict his experiences with whaling off the coast of Japan, icebergs in the South Atlantic, as well as nine exceptional watercolor and pencil drawings. The NHA was able to acquire this significant item thanks to support from Susan Blount, Polly Espy Millard, Art and Diane Kelly, and L. Dennis and Susan Shapiro.

Albert C. Gardner of Nantucket was captain of the 1836-40 voyage of the Nantucket whaleship Omega, but passed away on February 10, 1838, off the coast of Lima, Peru. The tooth depicts a 3-masted ship flying an American flag and long pennant, with an eagle, shield, arrows, and olives in its talons. On the reverse side is a willow tree and woman mourning at a monument that says “Albert Gardner Lost at Sea 1840.” The Omega returned to Nantucket in the spring of 1840, which may have been the earliest his wife, Sophronia Nye Edwards and their one daughter Sarah, learned of his death. This tooth was purchased with a generous gift from Janet and Rick Sherlund.

Northern Whale Fishery depicts British whaling ships in the frozen waters of the David Strait between Canada and Greenland. The work is an 1835 copy of an 1828 original by William John Huggins. The painting is a dramatic depiction of the British whaling fleet in the 1820s and 1830s, at a time when Nantucket whaling was at its zenith. The accuracy and level of detail is astounding and the viewer can admire in panoramic fashion the whaling operations in the Arctic. It complements other outstanding British pieces in the collection. Its purchase was possible with support from Kaaren and Charles Hale, Shelley and Graham Goldsmith, Carolyn and Jeffrey Paduch, an anonymous donor, and the Richard E. Griffin Family Acquisition Fund.

“These are important documents of Nantucket history and the whaling industry that paint a picture of the hardiness and personal costs paid by Nantucket’s early residents,” says Dan Elias, the NHA’s Robyn & John Davis
Chief Curator. “Donors came together enthusiastically to support these purchases, who through their generosity, made Nantucket that much richer.”

The NHA’s mission is to preserve and interpret the history of Nantucket through its programs, collections, and properties, in order to promote the island’s significance and foster an appreciation of it among all audiences.