Try Your Hand at a Traditional Nantucket Tar Roof Cake 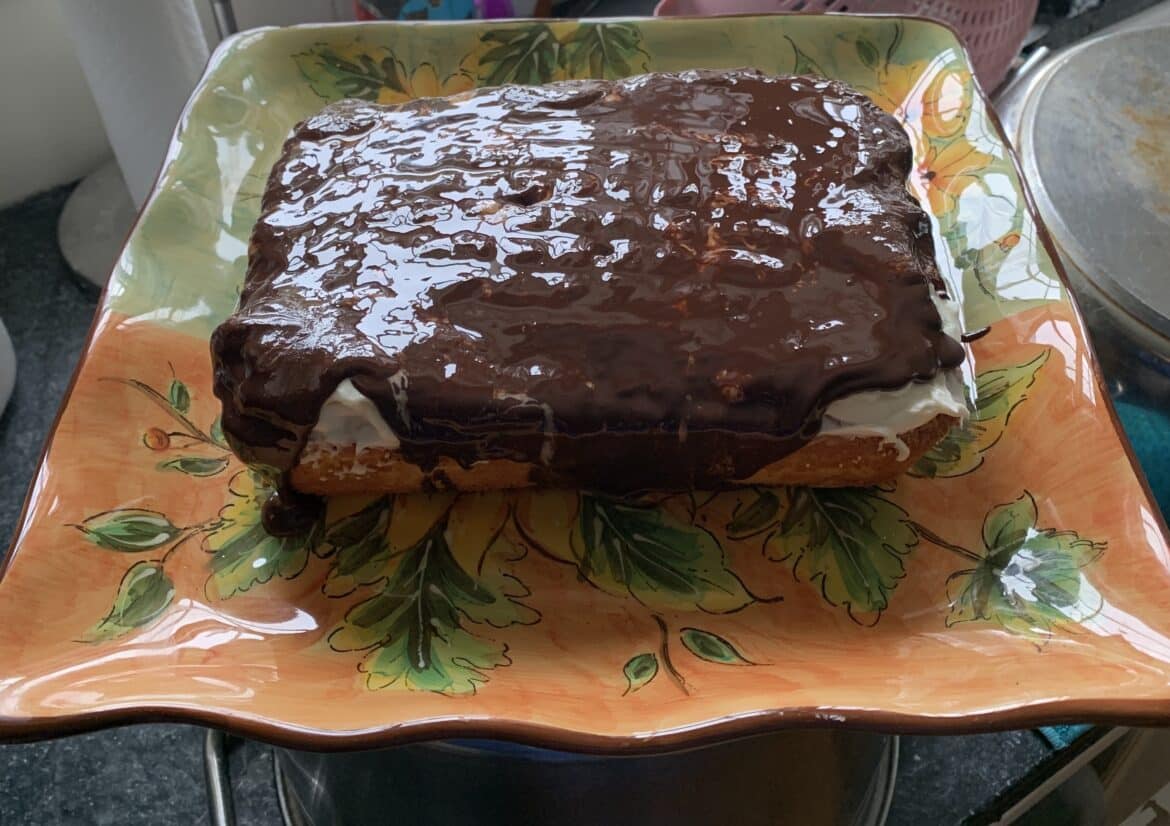 The Nantucket Island Fair is just around the corner, this Saturday and Sunday, September 14 and 15, 2019, and the theme for this year’s baking contest is a traditional Tarred Roof (or Tar Roof) Cake. Having never heard of such a delicacy, I took it upon myself to discover what was behind this “Nantucket” cake and tried out a few recipes of my own.

I first set out on a mission to find old Nantucket recipes, some of which use verbiage like “ a walnut sized amount of butter,” as opposed to a typical form of measurement–a truly charming Nantucket way of doing things. Finding recipes in books like “Good Things from Nantucket’s North Shore: A Culinary Memory” by Frances Ruley Karttunen and “From the Galleys of Nantucket,” a collection of recipes from the women of the North Congregational Church show the generational aspect of this recipe among other traditional recipes that have made their way to Nantucket tables year after year.

Based on articles, books, and the general commentary of the Nantucket community, the cake appears to have gotten its name “Tarred Roof/Tar Roof” from its appearance. The cake is a hot milk cake, with a layer of white or vanilla buttercream, and a chocolate sauce or frosting poured over the top, creating the appearance of tar (but much tastier!). There seems to be a bit of debate of whether the cake is a “tar” roof cake or a “tarred” roof cake, the name depends on which family or cookbook recipe you come across.

Farm Stand Manager at Bartlett’s Farm, Maryjane Mojer, fondly recalls this Nantucket delicacy, “Every family had their own recipe and every kid would tell you their mom made the best…and they did!” She recalls a customer coming into the bakery from North Carolina, requesting a Tarred Roof Cake and claiming this was a North Carolina specialty that his mom had written on a recipe card that had been in the family for years. Mojer, a Nantucketer whose family has been on-island for generations, knew exactly which cake he was requesting. She told him that it was a traditional Nantucket cake. The customer was certain it was an old North Carolina recipe, saying he would send the recipe along to Mojer once he got home. Sure enough, the recipe card arrived with a note at the top saying that the recipe was from Georgia Axt who happened to be a Nantucket resident. This traditional cake may have found its way to other parts of the country, but it still remains, “a classic, wonderful island recipe,” says Mojer.

Á la British Baking show or any of the other cooking shows I watch, I was excited to try out the recipes that I had come across and was determined to combine some of the best elements of each. Some call for all-purpose flour while others say that cake flour is a better alternative. Some call for double layers or a Bundt pan, while some say the best option is a single layer rectangular or square cake. Some recipes say that the key to the perfect cake is using a yellow cake, white cake, or sponge cake. Many follow the recipe of a traditional “hot milk cake,” made with milk that has been scalded. The “tar” on the cake can be bittersweet bakers chocolate to balance out the sweetness of the vanilla frosting, or be a semi-sweet chocolate, or a more frosting-like spread. Whichever way you choose to make, the most important part of this simple recipe is to master each of the elements. There are several recipes available online in addition to local Nantucket cookbooks, but the best come from the recipes that have been passed down from generation to generation.

For my first attempt at making the cake, I kept some traditional elements but tried to do a layered cake, which, ultimately, did not work out quite as I had hoped. The vanilla frosting was on the thin side and the melted chocolate was not quite the consistency I was looking for. In my second attempt, I took a much more traditional route:  a single square cake, with a thin layer of vanilla buttercream and a “tar” of melted bittersweet chocolate poured over the top. While this attempt was slightly more successful, the appearance of the cake was a little on the clumsy side. I look forward to seeing what the cakes look like at the fair and how different family recipes are represented!

If you’re lucky enough to have your mother’s, grandmother’s, or great-grandmother’s recipe stashed away in your recipe book, be sure to attempt it and enter this years contest at the Nantucket Island Fair. Even if you don’t take home a blue ribbon, you and your friends and family will delight in this simple, yet delicious island recipe.

Recipe from “From the Galleys of Nantucket”
compiled by First Congregational Church:

“This is traditionally made with a Hot Milk Cake in a rectangular pan. It is frosted with a vanilla butter frosting. Then melt 2 or 3 squares Baker’s chocolate and pour over the top of frosted cake. Let stand until chocolate hardens.
”The Hot Milk Cake recipe belongs to Mary Lamens

Another recipe worth trying is found in “Good Things from Nantucket’s North Shore: A Culinary Memoir” by Frances Ruley Karttunen. The recipe for Tar Roof Cake printed in the book was found amongst an inherited recipe box.

The Nantucket Island Fair takes place this weekend, Saturday and Sunday, September 14 and 15, out in Tom Nevers. Enter your Tar (Tarred) Roof Cake at Gertrude’s Harvest Exhibition in the community tent from 10am to 1pm on Saturday for your chance to take home a blue ribbon. More details at the Island Fair website.

Nantucket without Single-Use Plastics: Learn More about the Ban on September 19, 2019