History Dressed for the Holidays on Nantucket Island 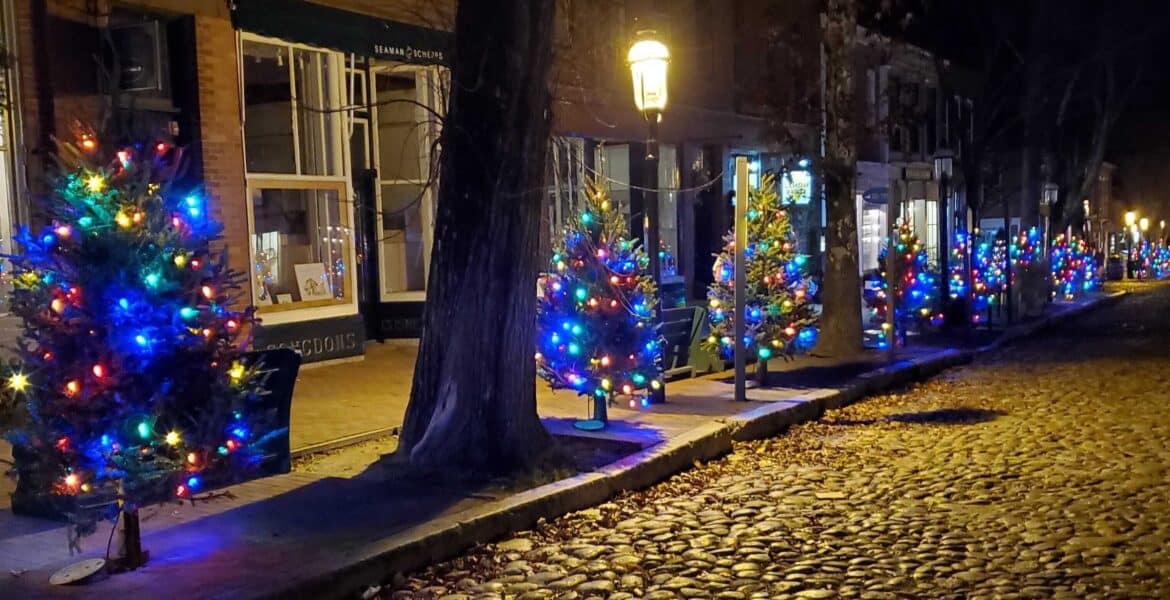 Nantucket Island has a long and storied past that residents treasure, organizations protect, and visitors love to explore. As a National Historic Landmark District that encompasses more than 30,000 acres — the entire island, Tuckernuck, and Muskeget — we are one of the largest conventional historic districts by area in the contiguous USA. From late November through New Year’s, many historic buildings in downtown Nantucket are beautifully adorned with festive decorations.

At the base of Main Street, a car from the Nantucket Railroad serves as part of The Club Car restaurant. Closed for the off-season, the staff adorned it with greenery and fun, colorful Christmas balls.

The railroad operated on Nantucket Island from 1881 until 1917. It was originally designed to run three miles, from Steamboat Wharf along Easy Street and Washington Street out to Surfside, where a restaurant was established. Tickets cost 35 cents a trip, and during the first year about 30,000 people rode the train. By 1882, the Surfside Land Company had plans for a “cottage city.” A hotel was constructed in Surfside in 1883. Tracks were extended to Siasconset in 1884. Train travelers arrived and departed six times a day during the summer season.

Nantucket weather and the surrounding ocean were not kind to the Nantucket Railroad, and it was plagued by shifting sands, storms, and surf that led to derailments and other issues. Finally, in 1917 the owners dissolved the railroad and tracks were torn up and it and other portions were sold and sent to France during World War I to aid the Allies.

At the base of Main in the center of the street is the iconic Lt. Max Wagner Memorial Fountain. Donated to the town in 1885, the fountain was originally installed at the top of Main Street. It was connected to a water main, and the lower, round basin was used to water horses. Spigots higher up provided fresh water for people. Eight years later, when street lighting was installed, the fountain was moved to the bottom of Main Street and disconnected from the water main. During the 1880s, there were at least two public fountains on Main Street.

An article published in the Inquirer & Mirror in July of 1923 described one of the Main Street fountains, stating it “quenches thirst of both man and beast, and four heavy iron drinking cups were fastened to chains which dangled from the bowl. Men and boys — and women, too—drank from those iron cups.”

Over the decades, the Lt. Max Wagner Memorial Fountain has become a much photographed island landmark. In 1973, the Nantucket Garden Club took responsibility for adorning the fountain seasonally and caring for the plantings, and its members continue to do so today. For more information about the fountain and its history, see this article in Yesterday’s Island/Today’s Nantucket.

Just before Thanksgiving, the Nantucket DPW installs 6-foot Christmas trees along many of the town’s streets and the Nantucket Chamber of Commerce organizes lights and decorations by local merchants, schoolchildren, and island organizations. An Illumination ceremony is held the Friday after Thanksgiving, and the trees remain through the Christmas holiday for all to enjoy.

At the very top of Main Street is a large Christmas tree that dominates the display. Behind this tree is one of the few brick buildings on Main Street that survived the Great Fire of 1846: the Pacific National Bank.

The Pacific National Bank (so named because it was in the Pacific Ocean where island whale ship owners made most of their money) was the location of a number of historic moments.

On October 1, 1847, about a year after the Great Fire, it was from a rooftop observatory in Pacific National Bank that Maria Mitchell discovered a comet viewed through a telescope set up at the top of the bank. Her discovery brought her international fame, and she went on to travel the world and teach astronomy at Vassar as the college’s first professor of astronomy. The Maria Mitchell Association on Nantucket was founded in 1902 to preserved the legacy of this island-born astronomer, naturalist, librarian, and educator. The Maria Mitchell Association operates two observatories, a natural science museum, an aquarium, a research center and preserves the historic birthplace of Maria Mitchell. A wide variety of science and history-related programming is offered throughout the year for people of all ages.

For the ultimate in combining holiday decorations and Nantucket history, visit the Nantucket Whaling Museum on Broad Street for the Nantucket Historical Association’s annual Festival of Trees. Dozens of adorned Christmas trees are placed around the museum amongst the NHA’s wonderful selection of artifacts and exhibits. Festival of Trees is open 10 am to 4pm Monday through Saturday through December 31, 2021, except for Christmas Day.