You Can Help with an Island Tradition 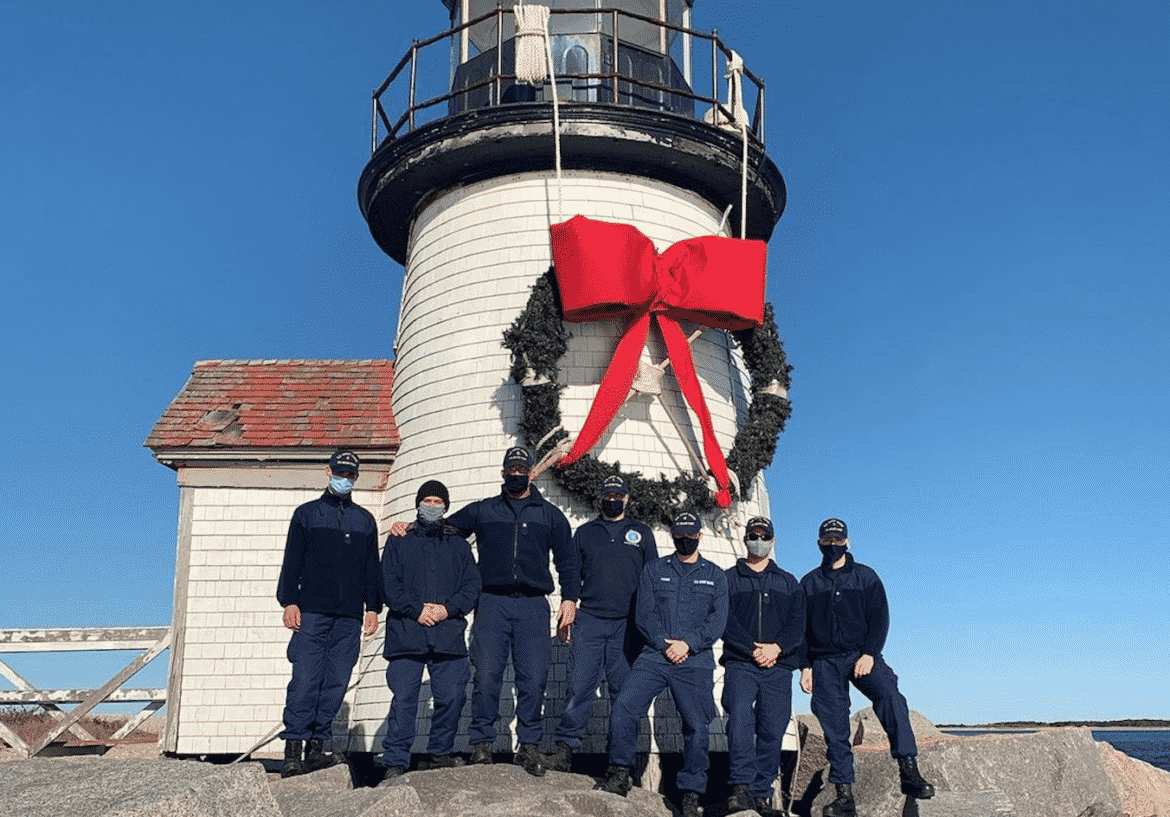 Brant Point Lighthouse is one of the gateways to Nantucket.  Anyone traveling to and from our island aboard the Hy-Line Cruises ferries or the Steamship Authority ferries passes this iconic landmark. Many, on their way off-island, toss a penny toward the lighthouse: a tradition that promises to guarantee a return to Nantucket Island.

Island residents and frequent visitors know that three times a year Brant Point Lighthouse is adorned for the season: with a daffodil wreath during springtime, an American flag for Independence Day in July, and a holiday wreath in December.  The tradition was started in 1993 by Masterchief Jack Downey.

What many do not know is that the Coast Guard servicemen at Station Brant Point have been giving this tradition to our island community: taking on the tasks of gathering the supplies, constructing the wreaths, and hanging them on the lighthouse — volunteering the labor and shouldering the expense.

“We’ve gotten so much support from Nantucket, and the Coasties love giving back to the community,” explained Lindsay Lawellin, whose husband Nathaniel Lawellin has been in the Coast Guard for 12 years. When she arrived on-island four years ago with her husband, Lindsay founded the Station Brant Point Spouses Organization, which sponsors a little league baseball team and other activities, and sometimes partners with island businesses for events. The organization created a local food pantry during the government shutdown to help affected Coast Guard families. This month, Lindsay, who will soon be leaving Nantucket with her family when Nathaniel is transferred to a Coast Guard station in Florida, has started a fundraiser to help with the expenses of this beloved island tradition of Brant Point Lighthouse wreaths.

Materials for each wreath can cost from $300 to $500, Lindsay explained. “The servicemen make the wreaths—they donate their labor — but flowers, ribbons, and supplies must be replenished.” And, she added, the winds at Brant Point are hard on the wreaths, making it impossible to re-use the same ones year after year. “I want to thank the guys for all their efforts and leave the island with funding to continue.”

The Coast Guard Station cannot accept gifts in excess of $25, so the Station Brant Point Spouses Organization is accepting donations for the wreaths.  As a 501(c)(7), it is a “social club” and donations to it are not considered tax-deductible.  Anyone interested in donating to this fundraiser can send money via Venmo @brantpointspouses or can mail a donation to them at:
Brant Point Spouses Organization
20 Vesper Lane, Unit H2
Nantucket, MA 02554

Be My Nantucket Valentine

Is a Car Really Necessary When...

Did You Forget Mother’s Day Is...