The steamship Nobska was my all-time favorite boat. She served Nantucket from 1925 until 1973. Thanks to the Steamship Authority, you can hear her whistle during the arrivals and departures of the Motor Vessel Eagle in Nantucket (but not in Hyannis!).

My first trip on the Nobska occurred before I was born, in the summer of 1934. My family lived in New Jersey and had been coming to Nantucket since 1915. For a number of years, they would take the train into New York from Morristown, and take an overnight steamer of the Fall River Line, arriving in New Bedford the next morning. Rounding Point Judith in Rhode Island was usually quite rough, and I was told that as a baby I was put in the stateroom bathtub so as not to roll off the bed. Arriving in New Bedford, they would walk across the dock, board the Nobska (or occasionally her sister ship the SS Martha’s Vineyard), and enjoy the relaxing five-hour trip to Nantucket with a brief stop at Oak Bluffs.

During World War II the boats were all painted grey, in fear of German submarines attacking them. Perhaps it was thought that they would blend into the frequent summertime fogs that blanketed Nantucket Sound.

While I was growing up, we started taking the Cape Codder from Grand Central Station all the way to Woods Hole, where the track ended about 50 feet from the boat. During the 3 ½ hour trip from Woods Hole, always including that Oak Bluffs stop, my sister and I would sometimes fill a Coke bottle with water, find some string, and dangle the bottle over the bow, swinging it back and forth until it broke in our little christening ceremony. It was fun to stand at the bow with the wind blowing in our faces, like Leonardo DiCaprio and Kate Winslet in the Titanic movie, trying to be the first to see the black standpipe. When going home after Labor Day, we would always toss pennies overboard at Brant Point to guarantee our return the next year.

Later on we would drive up through Connecticut and Rhode Island on US Route 1, and hope to get to the Jamestown ferry in time to avoid a two-hour wait. The alternative was to drive through a congested Providence, after which we knew it was three hours to Woods Hole. Driving a car onto the Nobska was a challenge: you drove up a gangplank not much wider than the car into the dark freight deck. Once there you had to turn right and then back down the lane with the other cars. It was always best to follow the deck crew’s directions on which way to turn the steering wheel, even though they seemed to be backwards.

From the freight deck you could look right down into the engine room and watch the steam engine pistons go up and down turning the propeller shaft. A crewman would put his hand near the pistons, moving it in sync with the action, and squirt oil onto the bearings. I remember seeing a digital counter showing the number of revolutions of the shaft as we steamed across the Sound.

When not wondering around the boat, we would sit in those canvas back chairs that you could pick up and move so you could sit where you wanted. There wasn’t much inside seating. I don’t remember the boat ever being full.

July 1948 was a very foggy month, and recalling the Nobska’s whistle sounding frequently as she entered the harbor brings back memories of a simpler life on Nantucket before all the boom and bustle.

New Bedford was dropped as a port in 1960. After 1965, my wife Corky and I lived in California and would fly east every summer, sometimes trekking to Woods Hole to board the Nobska. After we started having children, we would rent a stateroom for $5 and let them nap on the bunks. Kind of small, but quiet, the staterooms had wooden doors using a neat large brass key that you picked up from the Purser, and there was a sink that provided water of a questionable taste.

The SS Nantucket, renamed Naushon, came on line in 1957 and was a steamer, but she was ugly, had a most anti-nostalgia sounding horn, and was never very popular even to her end in 1987. With the ability to carry trailer trucks, not possible on the Nobska, she brought irreversible changes to the island.

Nowadays, does anyone even toss pennies overboard? All that copper on the bottom of the harbor! 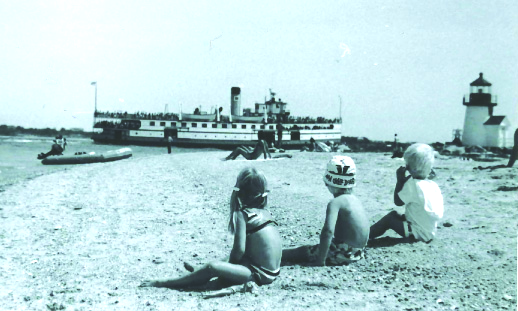 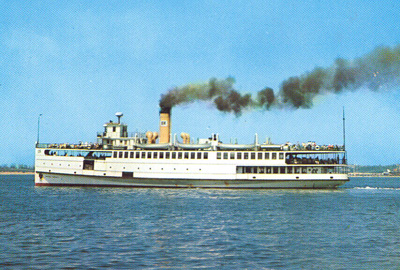